DevOps seemed to be the hot topic at itSMF USA – Fusion 18 IT Service Management conference. There was a dedicated DevOps track, a highlight of the Executive Connections programme was DevOps luminary Gene Kim’s exclusive session, sponsored by DASA. 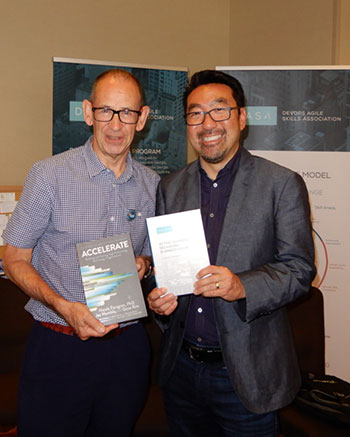 DASA was well represented, with Carmen d’Ardo, DevOps Thought Leader at TaskTop and DASA Ambassador’s Paul Wilkinson and myself facilitating different sessions. In addition to Carmen’s presentation at the conference he was also a co-facilitator with Cathy Kirsch for the Executive Connections Program sponsored by DASA. Paul spoke about why DevOps will fail, unless they invest in competences and in particular skills. I presented my DASA White Paper Realizing Business Value from DevOps for the first time. The response was encouraging, in particular to the concept of a broad Business-DevOps-Business value stream. It’s important because it’s in the ‘prequel’ and ‘sequel’ to IT that business value is defined and realized.

This end-to-end theme recurred in the demo of The Phoenix Project DevOps Business Simulation that Paul conducted, with me playing the role of his charming assistant who captured the findings. This Business Simulation or ‘serious game’ – built by GamingWorks – is based on the ground-breaking book The Phoenix Project and lets people experience the practical application of Lean, Agile and ITSM principles. It is intended for 9-12 managers and practitioners who fulfil business, application development and IT operations roles. It helps them develop their culture to achieve better collaboration and in so doing, derive more business value from their investments in IT. The full write-up of the session is available here, but the highlights were that the participants recognized their real-life concerns in the game, and discovered that DevOps offers techniques and mindsets that address them. An example of a technique is the visualization of work items based on their definite need for information, rather than just ‘implementing’ a standard tool. One of the changes in mindset was looking for the weakest link across the whole value stream, not only in IT.

In Gene Kim’s keynote, he emphasized the tragedy of the often-dysfunctional relationship between Dev and Ops and demonstrated the performance improvements that enterprises have achieved after investment in DevOps. He expanded on this and more in his Executive Connections lunch briefing. One of the key points was that the Product Owner should shift focus from requirements to outcomes. It completely aligns with the thinking behind the DASA Knowledge Area ‘Business Value Optimization’. It is imperative that business value is not only defined up front and that the users are guided and supported in actually realizing the advantage of using the information to take and act on better business decisions. If this doesn’t happen, all the effort has been for nothing! 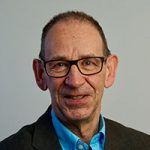 Also known as The IT Paradigmologist, Mark Smalley thinks, writes and speaks extensively about IT ‘paradigms’ such as DevOps. His main substantive interests are the…